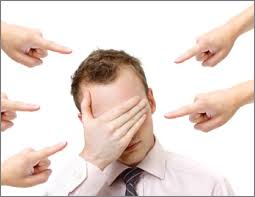 Have you ever been in a place where those around you, for whatever reason, made you feel less-than or condemned? It may have been something they said or perhaps a look they gave you that made you feel somewhat un-important. It may have come from experiences from your past that reminded you of such a feeling. Whatever it was, if you are familiar with this “less-than” feeling that has communicated condemnation and that perhaps has an element of shame attached to it, then hopefully this entry will offer you some words of encouragement. There are plenty of words in the English language that are synonymous with feelings of condemnation. Here are but a few. Denounce, punish, belittle, adjudge, decry, criticize, disapprove, judge and damn.  Often these depictions are projected from those who have experienced the same feelings and the way they have tried to combat it is to belittle others.

If you have ever been bullied, or been made to feel as though you are an outcast because of your social standing due to race or financial status, to name a couple, then you are not alone. Diversity, equity and inclusion are terms that are very prevalent today and in my opinion should be taken very seriously. As I think about the ministry of Jesus I get the impression that he tended to side with the outcasts of his day. He ate with tax collectors and prostitutes and had his greatest conflict with the religious. The religious of our day are everywhere. There seems to be as many opinions of religion as there are opinions. However, if Jesus fellowshipped with the tax collectors and the prostitutes of his day and related to the religious that these would enter the kingdom before them, then I hold up for your consideration that he also sides with those who have been or are presently being bullied and condemned.

I believe Jesus came to this world to do away with condemnation. As it states in Romans chapter eight verse one of the Bible, “There is therefore NO condemnation to those who are IN Christ Jesus. So the question I hold up for us to consider, “are we in Christ Jesus? Is there something we have to do to be in Christ Jesus? The evangelical world would probably say that there is something we have to do. But consider this. If the salvation that God provides each of us in Christ Jesus had some kind of something that we had to do in order for this salvation to be officially ours, like accepting it, then wouldn’t it make sense that we would become the savior instead of Jesus? If we are saved by grace and that not of ourselves its a gift of God, not of works, including acceptance, lest anyone should boast about it, (Eph 2:8 & 9) then as I have offered in other entries, waking up to what was done for each of us by Jesus’ crucifixion and resurrection, makes the gift of salvation possible by Jesus alone.

When we discover this salvation is already apart of us then that awareness has the power to change our entire being. We no longer have to feel as though we have to strive for something based upon our behavior like trying to please God in order to receive or better yet to maintain God’s favor. When that becomes prevalent then the condemnation we have experienced from others and from ourselves begins to wane away and we are free to reflect a “no condemnation” spirit to all those with whom we come in contact. Loving the other is not an easy task. But the more we reflect an unselfish love to and for others, the more they will begin to recognize the love of God that  already exists within themselves.

I have been negligent of late in reading your excellent blog. Thank you for continuing your efforts which get excellent responses. Happy holidays to you and yours.