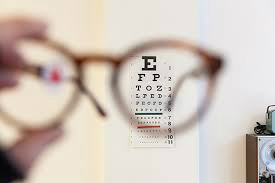 Not long ago while engaged in hospital chaplaincy ministry I entered a hospital room to introduce myself to the patient. She was a warm and caring person and we seemed to hit it off right away. It is usually my custom to share my hospital business card with patients in case there is a need for them to get in touch with me later during their hospital stay. I placed the card on her tray table and continued to visit with her. I noticed that the patient's nursing light was on indicating that she had requested her nurse to come check on her. While I stood next to her bed chatting with her the nurse knocked on the door to enquire as to what she needed.

It was a simple request. The patient indicated that because she could not see anything without her glasses and her purse was on a table across the room could she please retrieve her purse so she could put her glasses on. The nurse politely walked over to where the patient's purse was and brought it to her. She then asked if there was anything else she could do for her while she was there. The patient said she was fine for now so the nurse excused herself from the room.

As we continued our conversation it was certainly evident to me that this African-American woman was very spiritually minded. Our conversation turned toward her deep concern for all the violence and blood shed being reported in the news. I told her that I too shared her concern. Then I said to her, "A lot of people tend to look on the outward appearance but if they could see what we share within us they would know that we are kin." The expression on her face at that moment was remarkable. It was one of those Holy moments that words just can't describe.

The patient began to say over and over, "I can see! I can see! I can see!" With her hands raised she continued to express herself. I didn't exactly know what she was talking about. She reach over and picked up the business card I had placed on her tray table and she began to read aloud every word on the card. Then it became clear to me that she was reading my card without her glasses on. I had never witnessed anything like this before and it did not happen as a result of a prayer request, at least none of which I was aware.

As I have reflected upon this encounter I am being made increasingly aware of the awesome presence of the Holy Spirit. I am also becoming aware of my desire to want to be present when the Spirit moves within a given situation. I came back to visit this patient the next day partly because I wanted to see if she could still read my card without her glasses and sure enough she could!