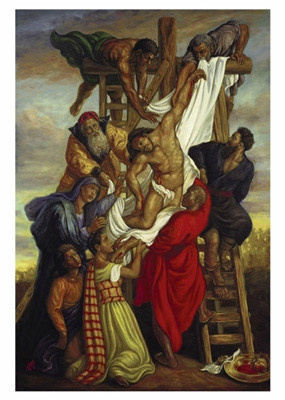 The first time I recall seeing the image of the face of Jesus from the standpoint of a black man was when I was invited to visit an African-American pastor friend in his home. When I entered his home I was warmly welcomed. As I began to notice pictures he and his wife had displayed on the walls of their living-room I noticed a familiar painting. It was the famous Last Supper with Jesus Christ and his disciples. As I observed closer it became apparent that all the figures in the painting were black.

This encounter took place several years ago but the impression it has made on me began to help my understanding regarding the way different cultures view familiar images. So I looked on the internet to discover African-American religious art. Sure enough there was the black artist's rendition of a biblical scene with Jesus and his disciples and they were all black. As I began to search various cultures it became apparent that each culture viewed the same scene through the eyes of their own culture.

Perhaps the image of Jesus observed by His disciples Peter, James and John recorded in Matthew's gospel chapter 17 may give some insight about our image. Matthew tells us that Jesus transfigured into a being of light. I believe we are offsprings of that Light and that makes us all one In Him! When we behold His face we see our own image!